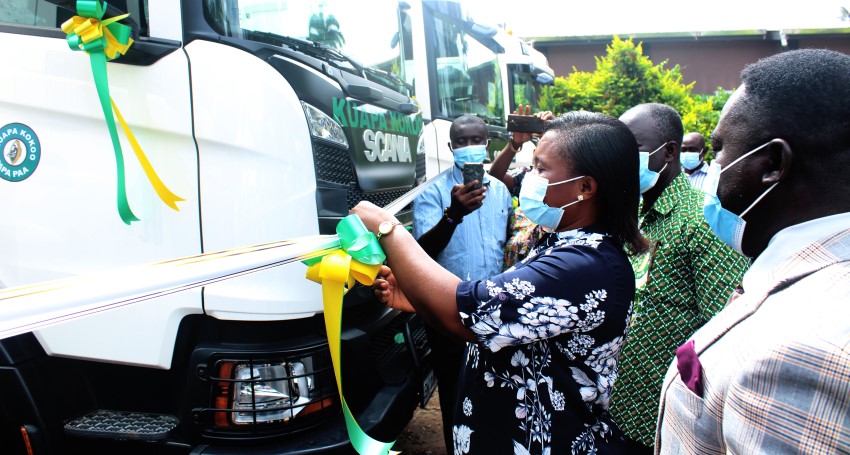 At the launch, Madam Fatima Ali expressed her delight for the newly acquired trucks. She was full of praise for the Management of KKFU and KKL for initiating and facilitating the purchase of the trucks.

She said that the trucks will ensure an efficient and effective internal transport system geared toward improving the transportation of cocoa beans purchased across the company’s operational areas. She noted that the trucks will facilitate secondary evacuation of cocoa from the various depots to the ports and as a result generate revenue for the organization. Mad. Fatima continued that she is hopeful that in some few years, Kuapa Kokoo will move away from hiring trucks from other private transporters and be able to evacuate all of its beans with Kuapa Kokoo trucks.

She advised that, to ensure sustainability of the transport section of the company and the longevity of these new trucks, drivers are to adopt good vehicle maintenance culture and also desist from unauthorized loading of cargo.

Mr. James Agyekum Kwarteng, Vice President of the Union urged all drivers to observe road safety measures to prolong the life span of the trucks. Mr. Abdulai Mahama applauded the Board’s support for the initiative to augment the fleet of vehicles.

Mr. Nelson Adubofour reiterated that Management will put in place necessary checks to ensure that the trucks stay in good and make sure the trucks are used for the intended purposes as the company plans to widen its internal operations to ensure efficiency. The official unveiling of the trucks ended with a word of prayer from Rev. Frank Oppong where he prayed and thank God, asking for good health, insight and direction for the leadership of Kuapa Kokoo to work towards improving the livelihoods of the farmers as they are doing.

Your email address will not be published. Required fields are marked*

No comments posted yet. Be the first to comment